Before I start I should qualify the title and explain that Gaz and I only travel to cheap parts of the world. We have done short stints in LA and various countries in Europe, but we generally try to avoid the Western world so that our money goes a lot further. When we’re in the UK we make small sacrifices to help save for our next trip so we try to resist all of the temptations below. The up side is that whilst we’re traveling most activities are much cheaper and therefore more affordable, even when you’re on a tight budget.

At the moment we’re in Sri Lanka and have been living on around £50 per day (between us) which includes our accommodation, transport, food, drink and activities. By activities I mean all of the below…

Yesterday I visited The Sanctury Spa and had the best massage of my life. I could hear the waves crashing on the beach and the Buddhist prayer music in the distance, as I laid on the massage bed in the most serene and tranquil tropical garden. My hour-long Ayurveda massage, a healing massage known for using oils to help joints and bones stay healthy, cost just £11.88. In the UK (Leeds) I’d be expected to pay more like 4 or 5 times that amount, and maybe double that again in London or at a Hotel Spa. 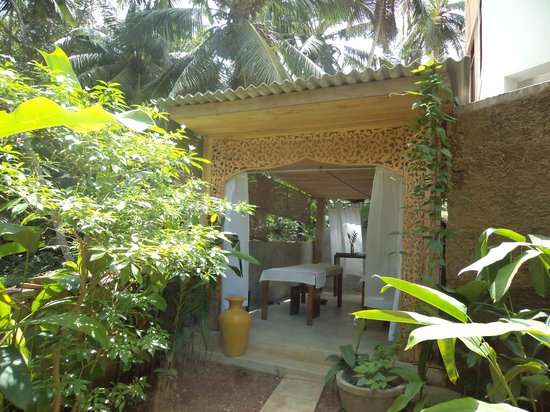 This photo of The Sanctuary Spa is courtesy of TripAdvisor

2) Eating Out in a Top Class Restaurant

When we’re traveling we like to mix up our eating habits. Most days we tend to go to a small local restaurant and eat local food, as we prefer to make sure our money is going to the right people. However every now and again we get a hankering for a more Western dish, like a beef steak in red wine sauce, which would set us back more £20 – £30 each if we ate out in a standard restaurant in UK.

On Friday, after a rather painful day of technological problems, moaning clients, and generally a work load too large to finish by the weekend, we decided to treat ourselves. We read up on the best restaurant in the area, hailed a tuk tuk and made our way there. When we arrived we secured a candlelit table on the beach, so we could watch the waves crash and let our troubles fizzle away. The menu was full of delectable delights and after 5 minutes of browsing Gaz chose a Tuna Steak and I chose the Beef Steak, we ordered a couple of beers and within ten minutes our meals had arrived. If there’s two things we love about Sri Lanka it’s the amazing flavours that are abundant in everything you eat, and it’s the huge smiles and friendly manner of the people. There’s not many other places in the world a complete stranger stops you to have a chat in the street. All of this combined we had a truly wonderful dinner and a few rounds of beer, all for the bargain price of £15.

Ok, so this one is a bit of a cheat as sometime its more circumstance than price that enables us to do water sports abroad. But it’s worth being mentioned because this week we have had a surf lesson and board hire, carried out the scariest scuba dive of our lives (but that’s another story) and we headed to Jungle Beach to do some snorkeling. We paid 5000RP for two surf lessons and board hire which is £23.80, 8750RP for both of our scuba dives (this included a small discount as we bought two dives) which is £41.60 , and the snorkeling was free as we have our own mask and snorkel. So for a week packed full of water sports we’ve spent £65.40 between us – £32.70 each. Some sports will cost more, during our visit to Vietnam earlier in the year we paid £155 each for 5 hours of Kite-Surfing and next week when our friends join us we’ll be hiring a boat to go Wake boarding for the day, this price is currently unknown but I’ll update the post once we’ve been out.

All in all, we’re probably spending less on water sports than what you spent on petrol this week… I’d say that’s a much better trade, wouldn’t you?

This is a habit I need to kick, otherwise we won’t last long, we’ll be back in UK, broke and contemplating a part-time job at Maccy Ds. However, if you should feel the need to celebrate i.e. a birthday or success in your job and you decide to indulge in a few cocktails, you won’t be too afraid to check your bank account in the morning. Alcohol abroad, in developing countries in particular, is much cheaper as the government haven’t wacked their ridiculous taxes on it (and after starting a rum business, we know just how silly the level of taxation is in the UK) The other bonus comes if you like your cocktails fruity, as the fruit is grown locally and freshly picked that day. Last night I enjoyed three passion fruit Daiquiris (again probably one of the best PF Daiquiris I’ve ever tasted) and each one only cost £2.80, making my total spend on three cocktails about the same price as what I’d pay for just one in Leeds.

This one is a very rare treat because if you do it too often you really will burn through your cash. So far in Sri Lanka, we’ve been looking for either cheap or mid-range hotels. Our cheapest night was our first night, which we spent in a dorm for around £4 each and our most expensive night so far has been around £20 for a decent hotel that had lowered their rates by more than half to encourage people to stay. Sri Lanka doesn’t have much of a backpackper route and therefore your typical traveler hostels are few and far between, you’re much more likely to stay in a guest house or hotel. And as we’re traveling in low season (the monsoon’s season finished right before we arrived but high season doesn’t kick off until late November, I think it’s because of all the Europeans are trying to escape the winter months) everywhere is empty and so we have no worries about getting a room. I’d had little experience using
Agoda, but during this trip it has been a real jem. If you look for a hotel on the day you wish to stay, i.e. when you wake up in the morning for a room that evening all the rates are slashed, sometimes by more than half! Just book one night and then when you arrive negotiate with the hotelier or guest house owner as they will usually honour that price but minus 15% for the Agoda fees they to pay.

We’ve been tempted to splash out on something fancy a few times but as there’s been so much choice we’ve decided to save buying a high-end hotel for when we really need it. Either because the choice is poor, because we’re fed up of a crap shower or hard mattress, or because one really tickles our fancy. This is a luxury we try to keep to a minimum and might do one or twice a month because, at the end of the day, we didn’t come to live in luxury, we came to explore and experience the culture and what real life is like for the local people. But with so many luxuries available it’s hard to say no sometimes…

This photo of Vibration Hotel is courtesy of TripAdvisor

Spice up your tweets with #TYI
Getting Lost & Found in the Cloud Forest, Panama

4 Responses to 6 luxuries you can only afford when travelling

We hope you find some useful info on our blog. If you'd like to know more send us an email... [email protected]

If you would like to advertise on Enjoy The Journey, please feel free to get in touch about advertising opportunities. We can offer sponsored posts, sidebar links and banner ads. Our rates are competitive with other travel blogs, if you’d like to know more please contact me via email [email protected]
Enjoyed this post? Follow us to get more travel tips and news updates!
Follow @etjourney